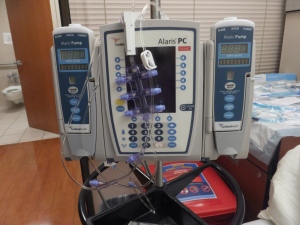 It has been years since I sat down and watched an episode of The Simpson’s. Looking back, I can certainly relate to the kids on the show. We have our own Lisa, Bart and Maggie characters in our family. So does anyone remember The Simpson’s “Itchy and Scratchy Show?” They are a mouse and cat cartoon, within the Simpson’s show. The cat and mouse are actually really mean to each other. I recall always letting out a disapproving “yuck” and covering little eyeballs in the room whenever the duo came on the screen.

Well, we have our own “Itchy and Scratchy Show” at the Frantz house. Not to worry … no violence involved. It seems one of Rick’s side effects from the Immunotherapy is lots of itching. Not only that but now he has little red spots popping up. Reminds me of perpetual chicken pox. So if that is all he has to deal with during cancer treatment, we are counting our blessings big-time.

It is why Rick had a dermatology appointment last week at MD Anderson to help with the issue before things get out of hand and the dude is covered in little red spots. They even did a biopsy to make sure it really wasn’t a big deal. Two prescriptions later, one a gigantic vat of itch cream I swear I could dip him in, and we were out of there. It was the shortest day on record at MDA for us.

This week Rick finished up maintenance infusion number five! Dr. Campbell confirmed that with six months of treatment under Rick’s belt, side effects from the immunotherapy would almost certainly be limited to the itching and was actually pretty common. Rick’s immune system is like another cartoon from my own childhood … Mighty Mouse … to the rescue!

When I mentioned to Dr. Campbell, our awesome oncologist, that maybe he could take out that one stitch from the biopsy last week since we were there, he said, “I don’t have a kit.”

“While I don’t have one either,” I said back.

The dermatologist did indicate to me it was really easy. Sure … that is what they all say … was my first thought. Dr. Campbell then drew a large picture of how to take the stitch out. Like the 84 injections after kidney removal surgery, it looks like I’m committed.

The birthday that almost wasn’t was also celebrated this week. I’m still pinching him to make sure he is real. Rick was the birthday boy with cake baked by adorable pregnant daughter, Katie, with lots of help from grandson Jacob. The little guy cracks a mean egg.

No MDA visits for two weeks. On the radar … CT and MRI scans and maintenance infusion #6. We aren’t even close to done yet. Thanks for continuing to keep us in your prayers!

One thought on “A cancer journey – six months of treatment down … 18 more to go!”