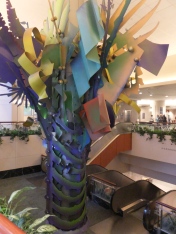 Yesterday was a huge day for Rick at MD Anderson. We had our bag packed with prayer quilt from Martha’s Quilters, assorted snacks and our smiles! After twenty-two tests, meetings with doctors or staff over several weeks, we finally qualified for a promising clinical trial. On Monday, they randomized the three drug choices Rick would receive. We got the immunotherapy drug Nivolumab and Bevacizumab, which stops the growth of new blood vessels that provide nutrition for cancer cells. Just don’t ask me how to actually pronounce the name of drugs.

So I learned immunotherapy works with the immune system to treat cancer. Rick’s kidney oncologist explained that these drugs turn his T-cells into supermen and they fight the cancer. He will have a total of three infusions every other week for six weeks to cool the kidney down. Then that darn kidney gets taken out. After that … infusions for a long time.

His first infusion appointment would last five hours and it pretty much did. Rick’s oldest awesome sister, Bonnie, hung out with us in the Peach Suite on the 8th floor, where the infusion happened. We made it a party even though it was serious business. We had the nicest ladies on the planet taking care of Rick.

We get a break from making that trek to the medical center for a couple of weeks to concentrate on getting Rick well! It’s a good thing … gotta catch on my laundry!

Thanks for the cards, prayers and phone calls. We are so blessed.